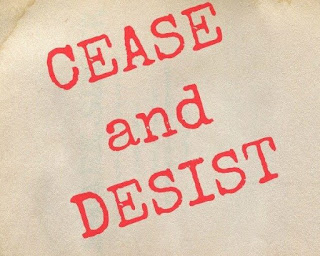 If you are represented by legal counsel, please direct this letter to your attorney immediately and have your attorney notify me of such representation.

You are hereby directed to CEASE AND DESIST ALL DEFAMATION, TARGETED CYBER-STALKING / HARASSMENT AND EXTORTION ATTEMPTS AGAINST MYSELF, REBECCA A. RODRIGUEZ.

I am an accomplished filmmaker and animal advocate. I have spent years successfully creating filmed content, helping animals and rescue organizations around the world and building a positive reputation. I am aware that you have engaged in targeted harassment, cyber-stalking and defamation as a means of spreading false and destructive rumors about me and in an effort to extort money from me.

Under Australian law, it is unlawful to:

-        Defame another individual, which is defined as “the publication of words or images to a person that damages the reputation of another ['slander' if spoken words, 'libel' if written words or images]. A defamatory statement is one that is likely to cause ordinary, reasonable people to think less of the person about whom the words or images are published. An inference that casts a defamatory imputation is enough to bring an action.”  In relation to defamatory material published on the Internet: Internet users may be sued in relation to material they write/publish themselves, or if they re-publish/distribute material written by someone else. They may also be sued if another person publishes something they wrote, for example, an email published without the writer's permission on a web site.

-        Harass an individual which Under the Criminal Code Act 1995, which is defined as using the internet, social media or a telephone to menace, harass or cause offence. The maximum penalty for this offence is three years imprisonment or a fine of more than $30,000.

-        Attempt to Extort money from an individual which is defined under the Crimes Act as obtaining a benefit, be it money, property or services from another person through coercion or threats. These offences are treated very seriously by the Courts and can carry heavy penalties up to and including a term of full time imprisonment. These offences include blackmail, threatening letters and threatening to accuse of crime to extort. Under this section, it is an offence to accuse someone of committing a crime or threaten to accuse someone of committing a crime in order to extort money from them or have them charged by police.

-          Impersonate an individual which is defined as pretending to be another person or acting in that other person’s capacity as a public official; the person does so knowing it to be in circumstances when the official is likely to be on duty; the person does so with the intent to deceive. (Adapted from the Criminal Code Act 1995)

The false statements that defame me, constitute harassment against me and serve as evidence of your attempted extortion from me are contained in numerous blogs, social media pages and posts on the internet. All of which have been preserved as evidence for presentation in court, if necessary.

The known locations of your published harassment against me and evidence of the crimes you are committing, can be found at:

Accordingly, I demand that you:

a.      immediately cease and desist the unlawful defamation, cyberstalking and extortion attempts aimed at me and my associates.
b.      remove all online content related to me and my associates from all known and unknown locations
c.       provide me with prompt written assurance within ten (10) days that you will cease and desist from further defamation, harassment and extortion attempts.
d.      Provide a written apology for the defamation of character and reputation, you directed against me.

If you do not comply with this cease and desist demand within this time period I will finalize my relationship with a legal representative in Australia and seek monetary damages and equitable relief for your offenses against me.

In addition, I will submit my prepared complaint to the Australian Police, in all related jurisdictions, I will continue my efforts with the Fraud and Extortion Squad in Victoria, Australia and file a formal complaint against CEE4Life, with the Australian Charities and Not-for-Profit Charities Commission related to the serious offenses you, as a representative of CEE4Life, have committed against me.

In the event you fail to meet this demand, please be advised that I will pursue all available legal remedies against you, including seeking monetary damages, injunctive relief, and an order that you pay court costs and attorney’s fees.

Before taking these steps, I am giving you one opportunity to discontinue your illegal conduct by complying with this demand within ten (10) days. Accordingly, please sign and return the attached Defamation Settlement Agreement within ten (10) days to:

If you doubt the validity of my claims, I recommend that you consult with an attorney in Australia, as I have done. If you or your attorney have any questions, please contact me directly.

This agreement acts as a contract between myself, Sybelle Foxcroft, and Rebecca A. Rodriguez. Forbearing enforcement of legally enforceable remedies is sufficient consideration to support this agreement. This agreement represents the entire agreement between the parties. Any statements made orally, written, or otherwise which are not contained herein shall have no impact on either parties’ rights or obligations elaborated in this agreement.