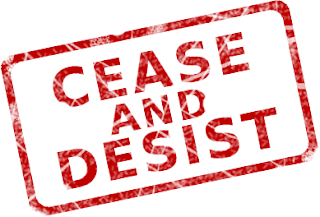 If you are represented by legal counsel, please direct this letter to your attorney immediately and have your attorney notify me of such representation.

You are hereby directed to CEASE AND DESIST ALL DEFAMATION AND TARGETED CYBER-STALKING / HARASSMENT AGAINST MYSELF, REBECCA A. RODRIGUEZ.

I am an accomplished filmmaker and animal advocate. I have spent years successfully creating filmed content, helping animals and rescue organizations around the world and building a positive reputation. I am aware that you have engaged in targeted harassment, cyber-stalking and defamation as a means of spreading false and destructive rumors about me and in an effort to extort money from me.

Under South African law, it is unlawful to:

In addition, you could be charged criminally and/or civilly with:


Your false statements that defame me, infringe on my right to dignity, constitute harassment against me, serve as attempted extortion and reflect your impersonation of me are contained in numerous blogs, social media pages and posts on the internet. All of which has been preserved as evidence for presentation in court, if necessary.

The known locations of your published harassment against me and evidence of the crimes you are committing, can be found at:


Accordingly, I demand that you

If you do not comply with this cease and desist demand within this time period, I will finalize my relationship with a legal representative in Cape Town, South Africa and seek monetary damages and equitable relief for your offenses against me.

In addition, I will submit my prepared complaint to the South African Police and the South African Fraud Prevention Service for the serious offenses of cyberstalking / harassment, attempted extortion and fraud.

In the event you fail to meet this demand, please be advised that I will pursue all available legal remedies, including seeking monetary damages, injunctive relief, and an order that you pay court costs and attorney’s fees.

Before taking these steps, I am giving you one opportunity to discontinue your illegal conduct by complying with this demand within ten (10) days. Accordingly, please sign and return the attached Defamation Settlement Agreement within ten (10) days to:

If you doubt the validity of my claims, I recommend that you consult with an attorney in South Africa, as I have done. If you or your attorney have any questions, please contact me directly.

Now You're Just Embarrassing Yourself

And now Briony Wolf  is an INVESTIGATOR? Briony Wolf is one of Sybelle Foxcroft's friends. She is a regular commenter on all of Sybelle's posts and she is the owner of the blog that Sybelle, Celia and Briony have been using to libel me for over three years. You can learn all about Briony here .  What a bunch of clowns. Thanks for the laugh!
Read more